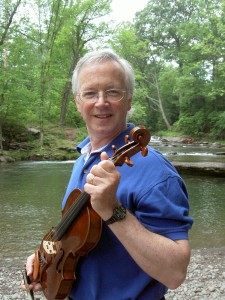 Ridley during the recording of the Lewis & Clark CD

Ridley began playing colonial American music more than 30 years ago while working at Morristown National Historical Park in New Jersey. (OK, his job was in the maintenance department, but he made the most of it, coming back on the weekends to play historic music at the Ford Mansion and Wick House.) He has made five albums with the noted balladeer Linda Russell and six with his wife, Anne. In addition, Ridley plays bluegrass with a group called String Fever.

In his “other” life, he is president of Enslow Publishers, Inc., which publishes educational books for children and teenagers. All of Anne and Ridley’s CDs were conceived initially with educational purposes in mind—to provide an enjoyable history lesson, while also providing entertainment sophisticated enough for adults. Two of these recordings—Music of the American Colonies and Music for Abraham Lincoln—were named Notable Recordings by the American Library Association. The Lincoln CD also received the endorsement of the Abraham Lincoln Bicentennial Commission. 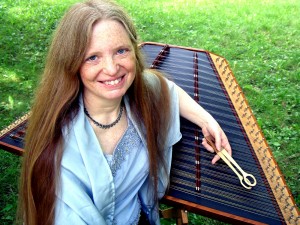 Anne during the recording of the Lewis & Clark CD

Anne began playing colonial music when she met Ridley. She played as a regular substitute on Broadway in the orchestra of The Secret Garden in 1992-1993. In her “other” life, she is executive editor of special health reports for Harvard Health Publishing, and she worked for many years as a correspondent at Newsweek. She does most of the duo’s research, which has included hours spent in the Library of Congress, Colonial Williamsburg, the Library for the Performing Arts at Lincoln Center, historical societies and various archives. With rare exceptions, all of their music is drawn from original manuscripts, sheet music and songsters. And it is performed on instruments accurate to the period.