George Washington and his Spies 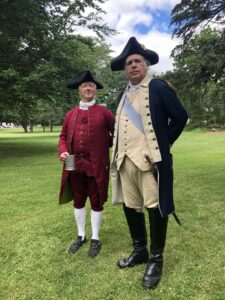 We’re always pleased to roll out a new show, and there are few with more fun stories than this one. There were many spies on both sides of the Revolutionary War. Some were officially spies—others were just people who saw what was happening and made it their mission to get word to George Washington. Spies helped Washington win the war. And some of these missions were even documented in poems and songs (the unsuccessful episodes, of course, because the successful ones remained secret at the time). From Nathan Hale to Benedict Arnold and the British Major John Andre, we celebrate colonial spy craft in story and song. (Photo: Ridley with our friend Dave Emerson as Washington.)